This is a long shot, and I can call Apple support, but someone in the forum might be able to answer. I was reading the reqs and FAQs regarding the apps for the new Sierra OSX. I currently have a 2011 APE in another part of the house that I wirelessly send iTunes playlists to from the computer. I use an app (called Retune on an old Nook to use to change playlists, volume and such). Hey, it works for me.

So, I believe this is "sort of" airplay. Or not since it isn't bluetooth ... If I upgrade to Sierra will this set up still work? I've attached a screen capture where you can see the little icon that I haven't a clue what it stands for, other than showing the two things that are connected. And a screen capture of the way I have the APE connected to my Router.

A reason I am hesitant is the 2006 APE will not longer talk to El Capitan and it has become an obsolete $100 paperweight. Thanks in advance!!!! 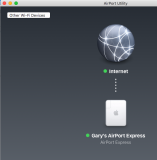 Staff member
Mod
Hmmm. My two cents - If the APE doesn’t talk to ElCapitan, I would think it will not talk to Sierra.

If you have an additional drive, you could experiment, installing Sierra yet having your original untouched.

The current 2011 APE does as you can see from the attached screen capture.

The 2006 APE doesn't. (Just doesn't "see" it and all we get is amber blinking) I don't think the 2006 APE ever worked since El Capitan was released I think in June/July 2015 and I had used the APE 2006 in December 2014 and it worked fine (with I guess Yosemite). So, we still really don't have an answer on whether Sierra will nail the APE 2011 like El Capitan buried the 2006. I guess I will attempt to call the geniuses at Apple (since I have AppleCare on the Mac Mini that is the computer behind the APE). If you have any other ideas, let me know. Thanks.
You must log in or register to reply here.
Share:
Twitter Reddit Pinterest Tumblr WhatsApp Email Link
Top