Why did you buy your Mac ?

Staff member
Mod
Let us know why you bought your Mac (maybe we'll understand if moving to x86 makes sense to you).

I got into the Graphic Design Field and the industry Standard for that is Mac, and i just got a new Dell from my folks a year ago, (now running Ubuntu Linux) and I couldn't justify getting a 2nd Desktop, and i needed something small faster and portable. Hence the 12" PowerBook G4, and i want to get rid of my dell for an iMac G5...

I bought mine because I'm a developer & geek and I like to keep up with whats going on. Until OS X didn't feel the Mac was worth any of my time, quite honestly.
C

what an awful bunch of options - what do you actually hope to derive and achieve with such a poll - offering such loaded and directionless choices to the question?

could you at least make sure people know this is totally tongue in cheek and pointless?...
G

The OS...definately the OS.
I started using the Mac in the DOS days, and it kicked serious heiney back then and still does now. I had an option to get an x86 laptop last year when I upgraded but when with the mac because of (1) previously owned software (2) lickably great powerbooks and (3) Panther

chevy said:
Let us know why you bought your Mac
Click to expand...

I originally bought a Mac because of Theorist... which was a Mac-only application. 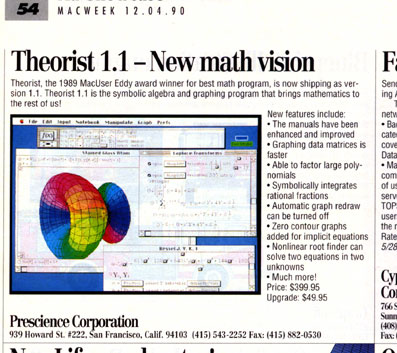 That, and I couldn't stand DOS.


(maybe we'll understand if moving to x86 makes sense to you).
Click to expand...

As I've been using Rhapsody on my ThinkPad for 5 years now (most of my web site was constructed on that system), I would guess that I've already made the move.

All your base are belong

This is a very good move.. I didnt buy a mac because of its processor I brought it for the operating system.

As long as the machines hardware is stable and fast (something no doubt apple will ensure) then I am happy.

Just out of curiousity... I voted now. For me it was mostly the OS and the applications, its robustness and because it's virus free. But now: The last one is "...because you're in love with Steve Jobs". There are 2 votes showing up for this one. Can those people please stand up and explain this further?

I don't think the move to x86 will affect things much. Well, it won't affect the level headed users much anyway.

What really bugs me about the move is the move itself. I'd still be just as bugged if they moved to any other architecture. The reason is that it dilutes the developer's focus. What are they meant to focus on now? Optimizing code for Altivec? Optimizing for G5? For x86?

This is a real shame because with 10.4 (since 10.3 really), we've finally got a mature OS that serves as a very good platform to build on. Keep a stable API with no more or very little changes, means that developers will have a clear roadmap of what they should develop and when. It also helps now that they're using GCC 4 since previous versions of GCC were notorious for breaking binary compatibility, especially with libraries. This is the reason you have GCC 2.95 if you want to target 10.1, GCC 3.1 if you want to target 10.2, and 3.3 if you want to target 10.3. With Tiger and GCC 4.

Sure, the solution is to run the so called 'fat binaries' but this makes the assumption that
a) the software will run acceptably fast. This is hard to guarantee under emulation. Witness the years of VPC development and it still runs like a snail on steroids.
b) Developers will bother with fat binaries. While Apple has had two lines of development (x86 and PPC) for years since the introduction of OS X, not all companies have such luxury. For the small developers, it could become more cost effective to just develop for one platform and they'd choose x86 since that seems to be the future direction things are heading.

This whole situation of having one OS running on many architectures reminds me of the early Windows Pocket PC days. Back then, there were all sorts of different processors being used, all running different architectures. Users were confused because when downloading software they were given a choice of 3 binaries. One for each processor. Developers were confused because sometimes code that ran fine on one architecture did not run correctly on others.

Various reasons. One for sure is that I work with Macs since System 7 (I remember working with 7.1 and 7.2...) and never owned a x86 PC. I also always liked the fact that I never was affected by worms, viruses and malware like Windows is. The system is robust, and comes shipped with most software I use and need.

PCs most of the time look butt-ugly as well, so maybe the better look of my G4 was a reason as well. Another reason is it's long livity. Before I got my G4 MDD, I had an iMac Rev. B (one of the original Bondi-blue ones). I used that for about... 5 years? I'm not 100% sure. But I am sure that in the time where I only changed the HDD and RAM in my iMac, my friends on Windows changed about 3/4 of their PCs, literally making it a new one, in the old ugly case.

That I never had to upgrade really, as my machine still was suitable for my needs after years was always a plus. And I'm sure that I will use my G4 (as long as I have a more or less up-to-date OS running smooth on it) quite a while. Even when the new Wintel Macs will be a common thing.

Damrod said:
That I never had to upgrade really, as my machine still was suitable for my needs after years was always a plus. And I'm sure that I will use my G4 (as long as I have a more or less up-to-date OS running smooth on it) quite a while. Even when the new Wintel Macs will be a common thing.
Click to expand...

I've built, repaired, operated, networked and developed for the x86 since 1986. I really got my first chance to work with a mac and pc side by side in 1996 while employed as a digital artist.

Honestly, I tinkered with Unix and Linux a long while and liked it's stability much better than Win.x, however, the applications I need for website development are not availble for linux.

With OS/X I was attracted to the stability and security features of Darwin, and most importantly, the applications I need such as PhotoShop, Flash MX, Dreamweaver MX etc, are readily available.

Damrod said:
Various reasons. One for sure is that I work with Macs since System 7 (I remember working with 7.1 and 7.2...)
Click to expand...

When I was 7 years old. My parent live in Los Gatos and live closer to Steve Woz's house. One weekend, He threw a party. Woz invited us. My father and woz talked about business thing. Later, Woz gave to my father a free LISA in 1983 for business purpose. Later, my father founded RasterOps for Mac. I have using System 1.1 since 1983 . Thanks god, I have never buy any PC in my life time. I have used PC many times at work. (SUCKS) Therefore I born hard core Mac user.

System 7.0.1 fixed a few bugs. System 7.0.1p was a Performa-specific release with System 7.0.1's fixes, plus some special features for novice users. (Performa was the name of Apple's home computer line for a number of years.)

System 7.1 implemented the Fonts folder so that fonts could be easily added and removed  previously they were buried within the System itself  and the Enabler scheme  which mean new models could be released with an Enabler file instead of a very minor update like with Systems 6.0.16.0.8. There was also a System 7.1p for Performas.

System 7.1.1  also known as System 7 Pro  bundled AppleScript, QuickTime, and PowerTalk, all of which used to be available separately. System 7.1.2 was made to support the PowerPC chip. System 7.1.3 fixed bugs in System 7.1.2.

System 7.5 integrated all of the features from the Performa releases. It also added the much more helpful Apple Guide help system. The startup screen finally had a progress bar.

Why did I go (back) to Macintosh?


So it's all about the OS and Dev Tools for me. Though the hardware has been a super-sweet bonus! Of course the NeXT hardware was (is) sweet too!

Additionally, I always hated DOS and Windows. Most of us that have been in this thing since we called the little computers Micro Computers (before they were called Personal Computers) started off using somthing other than an IBM PC -- be it an Apple ][, Atari 400/800 etc, Commodore 64 etc, etc, etc, etc... I think many of us just stayed in the other camp and never have left.

Was highly recommended by Steve Jobs.