Is this climate change?

Well in the West a prolong drought and East is almost swing with more than unusual rainfall! Even some towns in My county have seen mild flooding already twice this year! They wonder if the rail will ever stop! I live the finger lakes and know the water is almost 2 inches higher because of the constant rains!
Last edited: Nov 14, 2021

Staff member
Mod
The entire earth is experiencing a change in what humans would call 'normal' . Is this climate change? I think so. It is the cause of this change that people are arguing about.

It's always hard to say if an individual, unusual weather is a blip or linked to broader climate change (which I do believe is taking place). It does seem like there are more of these unusual events coming up. As for the cause of climate change, my view is it is best to listen to what the scientists across the world are finding. Be wary of politicians and lobbyists, who may have undeclared interests and will instead try to cast doubts on what scientists are finding.

It will always be possible to find scientists who don't agree with a particular theory (try finding human beings in any group that have 100% agreement on anything!), and that is part of the natural process of developing our understanding. It was surprising, therefore, that there were indications a few years ago that 97% of the scientists considered climate change to be caused by humans. That's a very high percentage for so many people from so many backgrounds, and should tell us that the evidence is very strong... Well, now I've seen a very recent study that involved looking at thousands of publications, and it looks more like 99+% are in agreement now:

There was also an interesting paragraph in the paper which highlights the discrepancy between public perception of the science and the reality:

"The question of the cause of observed and predicted global warming and precipitation change is still highly politically salient. A Gallup poll published in April 2021 found that there has been a deepening of the partisan divide in American politics on whether observed increases in the planet's temperature since the Industrial Revolution are primarily caused by humans [1]. Among elected U.S. politicians the divide is similarly stark: according to the Center for American Progress there were 139 elected officials in the 117th Congress (sitting in 2021), including 109 representatives and 30 senators, 'who refuse to acknowledge the scientific evidence of human-caused climate change' [2]. In 2016 Pew Research found that only 27% of U.S. adults believed that 'almost all' scientists agreed that climate change is due to human activity [3]."
Click to expand...

I’ve come to my own conclusions that Climatechange people have had it wrong all the time now! I am firm believer that it’s been the Oceans getting warmer that is causing these climate changes affects! Sure I still believe that somehow we have warmed the Oceans and need to learn what is causing that! Beside the plastic in our bloodstreams show Micro plastics is worrying me!

Staff member
Mod
Oceans are warming is part of the climate change fiasco.

Y'all can call it whatever you want. If it wasn't for global warming, we'd still be in the ice age!

Staff member
Mod
Earth does not care about climate and climate deniers, neither does nature, neither does life. Only a few animal species (including humans) will suffer. Earth, nature and life will continue their journey through space and time, they saw other cataclysms and extinctions before and will see others in the future.

As is always the case with such discussions, it's a good idea to look at data (and steer clear of propaganda). Here's a couple of graphs from Prof. Ed Hawkins, who is a scientist based at the University of Reading in the UK: 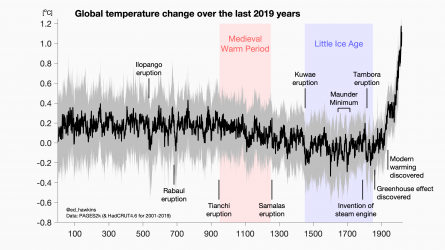 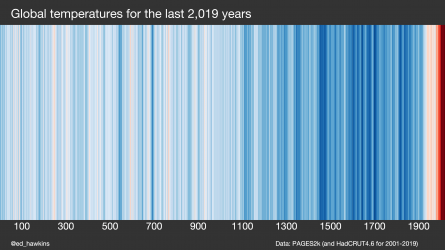 Looking over about 2000 years, it could be a complete and utter coincidence that global temperatures started to rocket when industrialization and modern transport rapidly developed, but if I was a gambler that's not the way I'd place my bets...

Cheryl said:
Oceans are warming is part of the climate change fiasco.
Click to expand...

Yea but the micro-plastics in humans is really worrying me! To me this pollution in even working the conservative side of me thinking they might have wrong and might be just a little over blown lately! The thrush I feel is somewhere in-between when it come to climate Change! I do believe the rise of big oil is dying and will dead in 100 years! Besides to get on point we need to stop the dumping of plastics in Oceans! We need a replacement soon hopefully plant based that we grow easily!
You must log in or register to reply here.
Share:
Twitter Email Share Link
Top