Here's my current desktop. I have a big collection of desktop backgrounds, so I change it often (ChangeDesktop rocks, by the way). This one is based on R.O.D TV, an anime series.

Edit: Wow. Have you looked at the first few pages of this thread lately? OS X sure was ugly back in 2002. I forgot just how different it looked back then. It's like they're pounding me on the head with those stripes....

the irony being the the pictures are on the wrong monitors....

Qion said:
I like the MC Escher background, but honestly how do you get any work done?

I have some great artwork and different assorted abstracts, but they're just so darn distracting when you're trying to merge a layer in Photoshop...
Click to expand...

Easy. When I'm working, I can't see my desktop image. And sometimes, when my brain is fogged from working too long, I just press F11 and all the windows disappear and reveal my desktop image ... and I just relax and lose myself in the M.C. Escher image. It helps to clear my head.

the irony being the the pictures are on the wrong monitors....
Click to expand...

look at my signature, then look at the picture again ...

Lt Major Burns said:
look at my signature, then look at the picture again ...
Click to expand...

I actually think that is quite funny; I would be doing the same thing if my monitors were a bit "prettier".

^^too lazy to take my own picture^^

Lt Major Burns said:
look at my signature, then look at the picture again ...
Click to expand...

Your signature is in a different language.

mine changes every 5 mins. it is a selection of different anime desktops from sailor moon, cardcaptor sakura, ah my goddess, and some others.
C

My team was the Expos

My desktop is very simple, but yet means something. If I get rich and I buy a 2006 Impala SS, it will become my new desktop.

RacerX said:
Well, let us not forget that we are talking about (in the case of my screenshot) an operating system from 1996... it's 10 years old now.
Click to expand...

Hey RacerX, a friend of mine still has a NeXT workstation that he still uses today and loves to death! Everytime I see it in action, my heart melts.

RacerX said:
This is the most recent change of desktop on any of my systems... 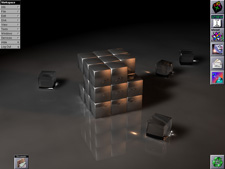 Wow, this is simply amazing. First, you're a NeXT guy, then you've got the same wallpaper I had about a month ago. Talk about a small world.

This shot is Enlightenment running on Linux. Some say the next major release of Enlightenment will be the "OS X interface on Unix".

My desktop? Generic apple.. stuff. My real desktop is a bit more interesting (but still boring)

Yeah, and isn't OS X UNIX based? Thats why it's so secure and stuff? The hidden filesystem reminds me of my linux computer..

tomdkat said:
Wow, this is simply amazing. First, you're a NeXT guy, then you've got the same wallpaper I had about a month ago. Talk about a small world.

This shot is Enlightenment running on Linux. Some say the next major release of Enlightenment will be the "OS X interface on Unix".

Enlightenment reminds me a little of Eazel's Nautilus.

eric2006 said:
Yeah, and isn't OS X UNIX based? Thats why it's so secure and stuff? The hidden filesystem reminds me of my linux computer..
Click to expand...

Mach was developed as it's own OS, but the developers of it used major elements of BSD to provide an interface for it (rather than starting from scratch and developing their own).

NEXTSTEP started out using 4.3BSD. which continued on through OPENSTEP 4.2. Rhapsody used 4.4BSD (with elements from OpenBSD and NetBSD), and Mac OS X (Darwin) uses elements of both 4.4BSD Lite and FreeBSD.

At one point BSD was set to become the free Unix for everyone, but it got caught up in a law suit with AT&T... the suit was settled (basically the Regents of the University of California won), but by that point Linux had already gotten a good foot hold in the open source community.

Apple owns a license for System V Release 2.2 (from A/UX), but System V (which is the foundations of the other systems I use... IRIX and Solaris) has a bunch of license restrictions and is at the heart of the SCO controversy (even though I'm pretty sure I can find the documentation where Caldara, which is now SCO, released the source code for System I, III, IV and early System V under a BSD like license).

Historical note on A/UX... even though it was using SVR2.2, Apple included parts of SVR3, SVR4 and 4.3BSD in A/UX. They just didn't have a license to sell A/UX as SVR4.

And pretty much any of the Unix based systems can be UNIX... it is just expensive to do so.

For example, IRIX 6.5 is UNIX® under the Open Group's earlier UNIX standard, but if SGI were to release IRIX 6.6 or even 7.x they would have to requalify under the most current standard to continue to use the name UNIX®. The most current version of IRIX is 6.5.28 (from fall of last year), the first release of 6.5 was back in 1998.

That is one reason why Apple has not attempted to go the extra step to make Mac OS X UNIX® under the Open Group's UNIX standard. It is enough to be Unix by the communities standard.

Canada-Man said:
My desktop is very simple, but yet means something. If I get rich and I buy a 2006 Impala SS, it will become my new desktop.

Oh, hell yes, it means something. I can totally appreciate your desktop image, man! I'm a HUGE Chevy fan and currently own a Malibu. Used to be called a Chevelle. Best darn muscle cars in the history of automobiles, IMO. Impalas are sweet, too! Hey, if we both get rich, we can race: Your Impala against my 1970 Chevelle/Malibu with a customized V10 Viper engine.

Not in the same context as my Enlightenment comment since

Attached is a screenshot of Enlightenment running on Solaris 7. You're looking at Opera and IE running natively on Solaris (SPARC).

tomdkat said:
You're looking at Opera and IE running natively on Solaris
Click to expand...

Linux rocks, though. I have my old 600 mhz fedora laptop loaded up with a new battery, and it's like a modern windows laptop.
S

I have yet to learn Linux, but I've been playing around with the linux distro called SuSE.

apparently that isn't a good example, and may put you off. google for Ubuntu, which is a very well developed Linux distro, and they also let you have free disks shipped to you for free!

The Ubuntu guys have a PPC version that should work with the G5. You just have to specify powerpc64 if I'm not mistaken. Before the installation, you have to hit tab during the bootloader to see the kernel options for continuing the installation.
You must log in or register to reply here.
Share:
Twitter Email Share Link
Top