I was finally able to get Big Sur on the MacMini (2014).
The backup is 713gb.
I had to get a different external drive, after having fought for a week with the Partitioned APFS 2T ED that was so painfully slow.

I gave up on that one and reformatted the ED that had been the TM B/U with Mojave on it. After about 8 hrs, it was at about 565gb so that was good. I had set the Energy Savings to not go to sleep when the display sleeps; allow for network; allow for power napping; don't go to sleep whenever there is inactivity. Off to bed.

Part two:
This morning, the original back up is done. As has been the case since upgrading the Big Sur, the MacMini is really hot (I've put it on four old cassettes that I've created a tower for air circulation). I shut down for a couple hours just so it could cool down.

I've been on now for about two hours (see updates). Getting toasty, and we have this.
So, here's a question: Just how is this TM supposed to backup every hour if it takes two hours to do 240mb?

And, yes, I've used TM since it was first introduced. So, not my first rodeo.

What's going on here? I've scoured the inner web and read all kinds of theories, and terminal look-sees, and reboots and "make sure's" and that's when I thought, "hm.... maybe I'll start fresh."

Any insights would be helpful. Is there a simple setting? It's not backing up any External drives either, if that helps. It's a head scratcher. (And I did read that Big Sur and TM do things a little differently than in the past ... but, the $64000 question is: And should I be concerned? 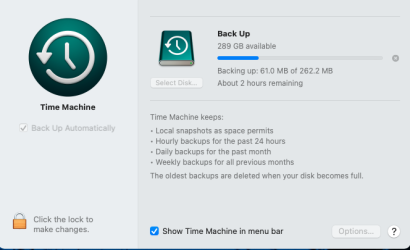 Since starting to write this post, about 10 minutes ago:

PS Here is the history of backups. It's noon. It's just now doing this backup. (Now, granted, there was no activity either).

The mdsync in Activity Monitor (which apparently is Spotlight) is showing between 51% and 62% CPU usage. Maybe this is all because the HD is 713GB and this is what is causing the initially, painfully slow Backups?

Yep it will do full install with a new version, this well known in Mac World!
Upvote 0 Downvote

Satcomer said:
Yep it will do full install with a new version, this well known in Mac World!
Click to expand...

Thanks, but not the question. The full backup went fine. All was what I assumed would happen. Not expecting the ongoing backups to take 8 hrs for 250mb and turn my MacMini into a skillet. Last night, I shut the poor thing down since it was so hot, and stopped "automatically backup" (And I assume the Backup disk, greyed out in "exclusions" is also correct. And "external" is not greyed out and in that list.

This morning I fired up the computer, and started a "preparing backup" that finished rather quickly. "Good," I thought.
Here's where we are now. "Calculating time remaining" so far is 15 minutes. Nothing has moved.

The back up, in theory, completed. I see a backup and I see files, folders. The TM shows "backing up X of Y" says it back-up and the next is in 30 minutes. Can someone confirm that TM doesn't count down or the bar doesn't move anymore? It just finishes and stays there until the next backup with a new count and amount? This was over 7 1/2 hrs today. I have no idea if spotlight is still indexing. I have tried to shut anything off that may be interfering with the backup, but I still see activity in activity monitor that should be "off" (ie Malwarebytes). I'm turning that back on again since I can't seem to bypass anyway.

It has to do changes when you go to sites in your browser creates new Internet Caches that is has to update! modern browsers cache many web sites to speed up reconnections to Web sites especially if you many tabs! Go into the Time Machine SystemPreferences and exclude your Internet cache and back up only every there days!
Upvote 0 Downvote

How? What are the steps to exclude the internet cache? I don't see that as a choice.

So, what appears to be happening is every 12 hrs or so there's a backup. There was one going on right now since 9am. Started with "backing up 145mb of 2.5GB. Now says 225mb of 2.56GB. It's 12:45. I went into "Enter Time Machine", as I have done each day, and I see what I am assuming are some backups.Nothing since 9pm last night however.

After a couple times where the computer has completely frozen if I went in to look, it appears to have actually made three backups.
I can go back to the new first full backup from Sunday, and I can restore something.Or, I can go into the one at 9pm last night and do a test.

When I then leave the TM backup after entering, the "backing up" that goes on for hours, stops and resets. It is now saying the last backup was 9pm last night. There have been three since Sunday. 3 have stopped when I went in and looked to see if anything was backing up (meaning looking into the actual Backup Drive or Entering TM). I do not stop, I do not reset. I simply went into the ED to see if there was a new backup.

As with Big Sur, I assume these are "just data" as described in various sites.

So, if there's trick to excluding internet cache, let me know where that's hidden and I'll give it a try.

Yesterday, by the way, we were gone all day and internet was off. Took 8 hrs for the backup of 130mb.

You're suggesting to turn off automatic backup then, correct? Thanks. PS I assume you mean every 3 days not there. Doesn't matter. There have only been three in five BTW, is it still possible to schedule a backup? Where is that hidden?
Last edited: Nov 9, 2021
Upvote 0 Downvote

I'm curious too as to why it takes so long.
The Full backup is 713gb.
I barely used it the past few days.
It's connected vis USB.
But... here's what I did yesterday.
I downloaded TimeMachineEdit. (after reading about in on CNET).
I set it to do a backup at 12am. (or, as soon as possible afterwards).
And to do it twice a week.

Turned on the computer this morning. Apparently there were two backups last night, one at 1215 and one at 420.
Just did a test and went back to Sunday. Restored a file. All went well.
The backup shows the "last backup" matches the time on the HD.

So, maybe Spotlight is finally done indexing. Maybe the moon aligned with Venus.
This is the set up for me right now.

And I did find out, that since I have Microsoft 365 they offer 1TB of storage along with that subscription. After screwing around with the hurdles and hoops of that yesterday - for about an hour or so - I think I figured out how to save something in their cloud and keep it on my computer (I'm not a fan of everything in the cloud as awesomely awesome as it's marketed to be). It has to with alt-clicks and right clicks. Not explained of course. USER has to learn, figure out, trial and error, test.
Thanks for your interest.
Oh ... PS I chose "quote" to respond but it doesn't work. Shows that I did, but it didn't.
Upvote 0 Downvote