The M1 is awesome. Looking forward to next gen Apple Silicon chips! It's taken surprisingly long so far for a two year transition. I got an Air first and then got it replaced by an MBP from work. I think I actually prefer the Air – better keyboard and I still find the touch bar less usable than physical keys.

It's so nice to see that familiar faces are still around here. Cheers and wheeee!

Good to see you too, ksv!

KSV glad to see you again!

This one is for @ScottW

I joined this place in 2000, when I was 12. After a while and quite some posts, edX invited me to be a mod, which I felt as a great honour. Not sure how long that career lasted, perhaps a year or two.

I think it must've been the summer of 2002 when I was approached by a guy, Bjørn, on the airport on way home from summer vacation, for the sole reason I was using a PowerBook G4. Back then, there weren't many Mac users, especially our age. Turned out edX was a fellow acquaintance! Bjørn met edX the year before. Bjørn is now a lecturer and edX a psychologist.

I've made such a lot of connections through this forum, mostly indirectly. Once, I made some question about arabic language, and Gia put me in touch with a Saudi, who connected me with another person who's been a friend for years now.

The only forum member here I've met in person though is toast (François), who I made video reports with, from Apple Expo 2003. He also came visit us in Oslo in 2016.

I'd like to hand out big kudos to @ScottW for still keeping this forum up. That's some longevity!
Cheers for friendships and lifelong connections

KSV what do think about the new M1 Mac Book Pro chip? Will you jump at that this holiday season?

The M1 Pro and Max are awesome, but the M1 provides more than enough power for my daily work. Also love the fact that my laptop stays cool and silent. Lack of support for more than one external display is a significant downside though. Won't be spending own money on an upgrade, but my employer might have to next year

ksv said:
The M1 Pro and Max are awesome, but the M1 provides more than enough power for my daily work. Also love the fact that my laptop stays cool and silent. Lack of support for more than one external display is a significant downside though. Won't be spending own money on an upgrade, but my employer might have to next year

Nope1 The M1 Mac Book Air is enough to this retiree to get email and web boards!

happy new year one and all.

I don't think it would be too expensive to buy a round for the house.

Happy New Year to everyone too.

Yea however I'm waiting from Spring! Winter is starting to grow old today! However it's been surprising not very snowy. Sure we have some dusting but nothing heavy sense November of last year! I guess my prediction sense we had raining Summer/Fall I was afraid of massive snow falls but we finally have a semi mild winter so far! This first one sense 2013!

Yeah. Not much incentive to hit the slopes yet. 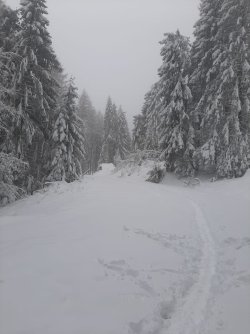 my daughter in Frankfurt had her first experience of xcountry!

We had to walk that way, uphill, both ways.

The down part of uphill was tough. Xcountry skis are hard to turn

This reminds me! When I was young my friend convinced me after work to go to local ski slope for evening sky day on a Wednesday ! I had my own skis and so did he so went went in his car and half there is started light snowing (in was January) and besides the ski officials, a Mother and he preteen kid and us two guys on all the slopes! After being in high school sky club I was pretty good and my friend was just as good! So we were doing the moles expert courses when a official stop us at the top hill said on strait course thee slicked it down for race the next day and asked use to try the slick course out and they would time us! so my friend went down first and then it was my turn! The course went have down the 1500 hill to 25 meter Plateau before it became steep again and on forest have I was making good time! Then on the plateau I saw that young kid come out of the woods and cut across the sloop I was doing about 50 miles and hour! I hit the back of his skis and flew the air saying sh@t through thew air into snow bank with my skies going everywhere! One official came right over me and when I was getting back up his buddy was kicking the Mother son off the slopes! That was interesting sky adventure1 funny things though, soon I joined the Army and never went skiing ever again and end up giving my skis up to my nephews and they used them to race in sky club because they were extra long built for maxim speed!

Today that kid will be on a snowboard. .

I was running a program on a local mountain one year, and we had this one young “instructor” who was a tremendous skier but a real a-hole. We usually got the “instructors” to participate in professional training to get certified. At the cert test he got bored and started hot-shotting around, came out of the trees and crashed into the trainer.

Needless to say he failed. Odd to say he blamed the trainer for not getting out of the way.